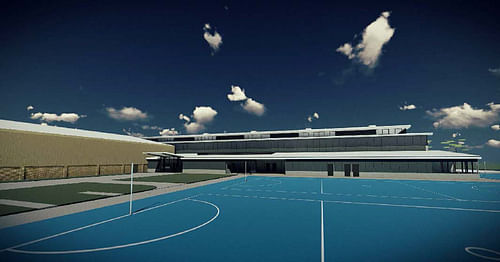 At the Ordinary Meeting of Council held this week, Council resolved to award the contract for the construction of the Westend Stadium redevelopment to Hines Constructions, marking a significant milestone for the project.
The first stage of the $31M Griffith Regional Sports Precinct was finalised earlier this year, with the official opening of the 50m pool at Griffith Regional Aquatic Leisure Centre. Council is now turning its attention to the construction of the $26.5M overhaul of Westend Stadium, with work expected to commence late April to early May 2021.
The project has a 12 month completion schedule from the date of commencement.
The development will see Westend grounds and stadium overhauled to become a state of the art sporting arena, allowing for increased participation from local sporting groups, schools and organisations, as well as providing opportunities to host major local and regional sporting events and carnivals.
The complex will feature a total of seven indoor basketball courts with seating for over 1000 people, seven all weather netball courts, a new synthetic athletics track with new lighting, a new synthetic turf hockey pitch and a new grandstand.
The main stadium will be extended to include room for the additional basketball courts and seating, meaning Griffith will be able to offer a location for major basketball events and expand on our local competitions.
Meanwhile to the right of the stadium all weather netball courts will be constructed.
In addition, a synthetic athletics track will allow local athletes to train and compete on a fast and high-performing track.
The synthetic turf hockey pitch will be durable, environmentally friendly, and provides an all-weather surface with the potential to host other sports.
Griffith Mayor, Councillor John Dal Broi said last night’s decision to appoint Hines and increase the overall budget for the Stadium redevelopment is a positive outcome.
“Throughout this entire process Council has consulted with the community, key stakeholders and major sporting groups to ensure we were going to deliver the best possible outcomes for Griffith,” said Councillor Dal Broi.
“This has meant we have increased the scope of works from what was originally planned, which has led to a budget increase.
“It is important that we make sure this facility serves the needs of the community not only for now, but well into the future,” he said.
Council has resolved to increase the building footprint by 1,263sqm (33%), install a new water based hockey pitch rather than sand based, construct a new shared pathway including full fencing around the perimeter, and two concrete netball courts (replacing two asphalt courts), additional internal pathway lighting and other minor sporting infrastructure modifications.
General Manager, Brett Stonestreet said this project was made possible thanks to funding from both the State and Federal Governments.
“In 2018 the NSW Government approved an application under the Regional Sports Infrastructure Fund which saw Council granted $10M,” said Mr Stonestreet.
“In 2019 our Member for Farrer, Sussan Ley announced a $4.5M contribution from the Australian Government’s Building Better Regions Fund, and Council has added $16.1M to see the project through.
“Working together across three tiers of Government, we are now able to provide Griffith with state of the art sporting facilities not just for local events, but attracting regional and state events into the future across a range of sporting activities,” he added.
***ends***