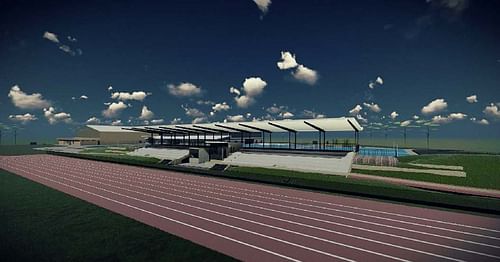 “Westend Stadium and Oval, is part of the overall Griffith Regional Sports Precinct, and is a $25.7M stage of the project and will see the Stadium become a state of the art sporting arena, allowing for increased participation from local sporting groups, schools and organisations, as well as providing opportunities to host major local and regional sporting events and carnivals,” said Councillor Dal Broi.

“Earlier this year, Council resolved to increase the scope of the works and this funding will help fund part of the additions. I would like to extend my thanks to the NSW State Government for helping Council deliver this important infrastructure which will benefit the community and have a positive economic impact,” he added.

Council resolved earlier this year to increase the building footprint by 1,263sqm (33%), install a new water based hockey pitch rather than sand based, construct a new shared pathway including full fencing around the perimeter, and two concrete netball courts (replacing two asphalt courts), additional internal pathway lighting and other minor sporting infrastructure modifications complete the enhancements.

The main stadium will be extended to include room for the additional basketball courts and seating, meaning Griffith will be able to offer a location for major basketball events and expand on our local competitions, along with all-weather netball courts constructed to the right of the complex.

In addition, a synthetic athletics track will allow local athletes to train and compete on a fast and high-performing track, and an artificial turf hockey pitch provides a high quality all-weather surface for players.

Griffith City Council General Manager, Mr Brett Stonestreet said projects of this magnitude simply could not get off the ground without the support of the NSW and Federal Governments.

“This project is an example of all three tiers of Government coming together to benefit the community,” said Mr Stonestreet.

“This additional $1M from the NSW Government demonstrates the belief they have in the precinct, and our Local Government Area as a whole.”