Council >> Our Organisation >> About Council

The Council is a corporate body having perpetual succession. This means that while the membership of the Council (the twelve elected members) will vary from time to time, the actual operation of the Council will continue unaffected. The twelve members of the Council are elected for a four year term and carry out their duties under the provisions of the Local Government Act and Regulations. The Mayor of Griffith City Council is popularly elected every four years and each year a Deputy Mayor is elected by the members of the Council. The Mayor, as well as being Chairman of Meetings, represents Council when it is not in session. Simply stated, Council is the decision and policy making body whilst Council staff are the means by which these decisions and policies are carried into effect.

The Mayor's responsibilities vary widely, but all are intended to ensure the well-being of the city and its people. The Mayor officially represents the Council at many public events, and often opens new establishments within the city, attends inaugural meetings, and is guest speaker at many functions. Civic welcomes are extended by the Mayor to dignitaries visiting the city. The Mayor also meets Cabinet Ministers, Head of Government Departments and other Members of Parliament to discuss matters of common interest to the city.

The Mayor is automatically on all Council Committees (ex-officio), chairs all full Council meetings, and has the right to vote. Whenever the vote is even, the Mayor may exercise a casting vote. At Council meetings the Mayor may bring before the Council, as a Mayoral Minute, any matter which requires immediate attention. When these Mayoral Minutes are brought forward at meetings, they are given precedence over all other business. When the Council is not in session (meeting) the Mayor may make policy decisions which can then be confirmed and accepted by the full Council at its next meeting.

Councillors are elected members of the Council. Their jobs cover many areas, each aimed at satisfying expectations of the local community.

The Councillors are the Board of Directors for the local Government organisation. They approve Council expenditure; set goals, strategies and policies; co-operate with appointed managers; and decide issues submitted to the Council. Councillors also allocate resources for various Local Government functions, and watch over the efficiency, cost and effectiveness of Council's organisation. They help set priorities for Council both in planning and in executions of its work programme. They must be advocates for the Local Government area and promote it, and can be called upon to represent Council in inter-government matters. They assist fellow Councillors in deciding matters discussed at meetings, eg finance, law, technical matters and economics. Councillors, like the Mayor, undertake civic duties such as receiving dignitaries and attending civic functions.

Being elected representatives, Councillors are delegates and trustees not only for the people who voted for them, but also for those who did not. They pass on information about Council activities to various sectors of the community and provide input of community attitudes to Council. They often receive petitions from voters, and so Councillors have to make sure they are familiar with the issues involved.

Councillors are expected to show leadership in the community, in the Council, and as private citizens. They must at all times act reasonable, with equity and justice, and must submerge any self interest. They are expected to be active and look to the future. To do all this, Councillors need to keep themselves informed of a wide range of matters, about government, administration, finance, economics and society.

From the beginning of settlement until 1928, local government services were provided by the Water Conservation and Irrigation Commission. 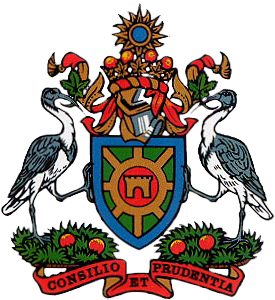 This is the essential element and symbolises the City independently of the other components which contribute to the overall design. The arms of local government bodies frequently incorporate devices to convey a sense of civic order and good administration.

Griffith is fortunate in that these qualities are particularly well expressed in Walter Burley Griffin's plan of the city. Accordingly, the radial layout of the city is represented in gold on the shield. The central carmine disc carries a castellated building in gold to represent the responsible authority. An open portal stands for democratic and accessible local government. Green areas enclosed by the radial arms represent the surrounding primary industry while the blue border of the shield symbolises irrigation canals which bring prosperity to the district.

On a helmet is a crest of symbolic leaves (grape) and fruit (oranges) surmounted by a sun and water device. The wreath and mantle of carmine and gold enhance the helmet and crest. The helmet and crest, except for the disc representing water, are rendered in gold.

The logo depicts a number of elements with the Griffith area. The water wheel is shown curving around the 'g' as citrus fruits are a big part of Griffith's industry. Under the fruit is the g's tail which represents the many irrigation channels found in the Griffith area. While this logo works well in its entirety, the "G" on its own or simply, the hand rendered Griffith text can form workable logos after the design becomes recognised within the community.